Male in his early 50s presents for a sexual transmitted infection (STI) check, along with his new (and younger) significant other; he is currently asymptomatic.  During the history, patient admits to some shortness of breath and chest discomfort during a recent argument with his significant other, as well as, some shortness of breath with exertion (both walking and intercourse) in the past few days.  Patient, again, has no current complaints.

The history prompted the patient to have an ECG preformed.  Which showed…. 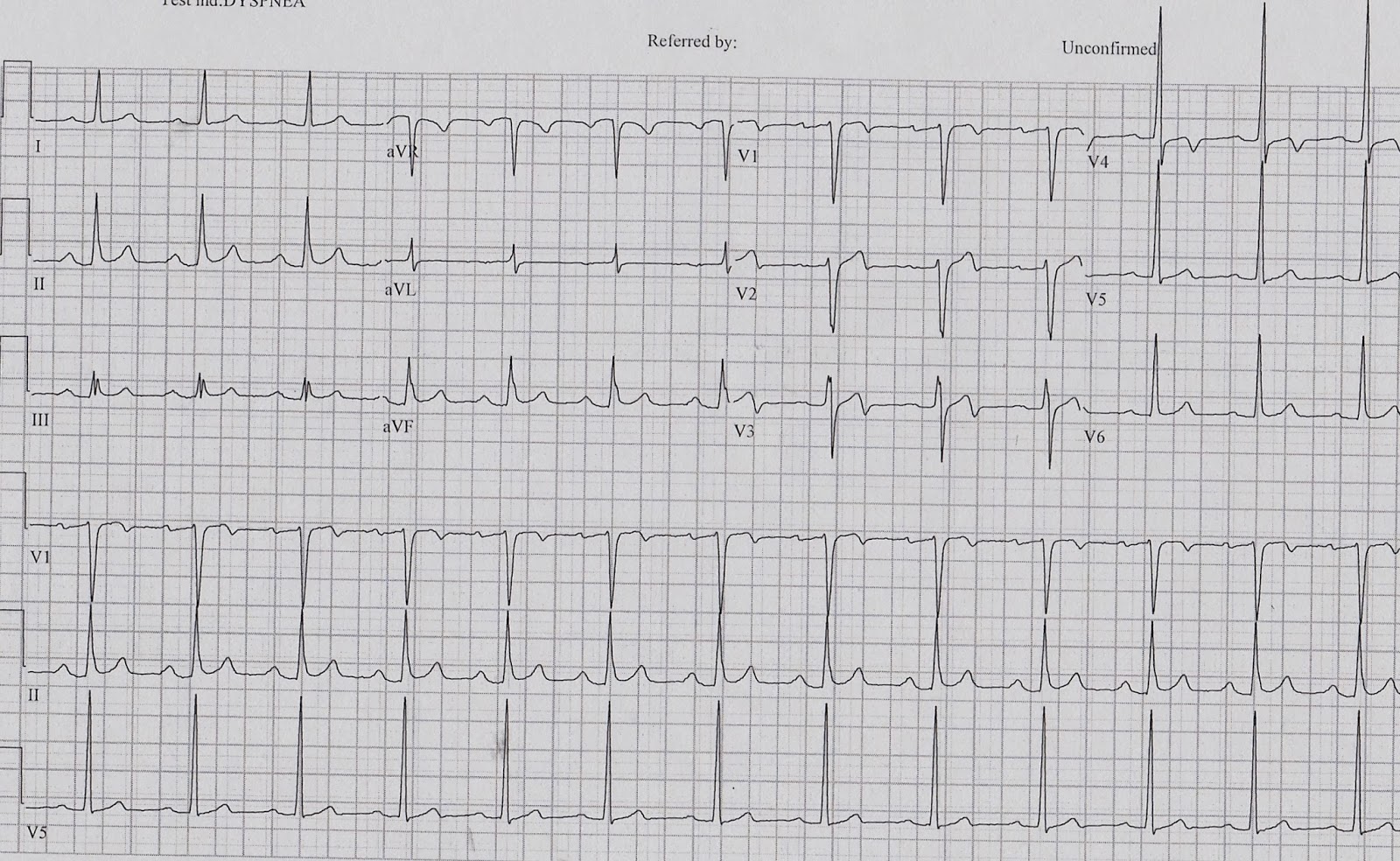 Because of these findings, cardiology was contacted and the patient was admitted.

Wellens Syndrome represents a characteristic T-wave change on electrocardiogram (ECG) that is present during pain-free periods in a patient with intermittent chest pain and symptoms consistent with unstable angina/ischemic chest pain.

The findings of Wellens Syndrome suggest a high-degree stenosis of the proximal left anterior descending (LAD) coronary artery (i.e., the “Widow Maker”), that if not treated with intervention will lead to a massive anterior myocardial infarction and/or death within two weeks (mean time, 8.5 days) in 75% of patients (i.e., a “Widow Maker”).  Medical Management is ineffective.

Wellens syndrome is characterized by T-wave changes in the precordial leads, mainly V2 & V3 ± V4, during pain free periods, in a patient with a history of chest pain that is consistent with unstable angina/ischemic chest pain.  Type A (or Type I) (75-76% of cases) shows deeply inverted T-waves, while Type B (or Type II) (24-25% of cases) shows biphasic T-wave.  Type A is rarely missed, but Type B is often interpreted as “non-specific T wave changes” by the computer and clinicians. 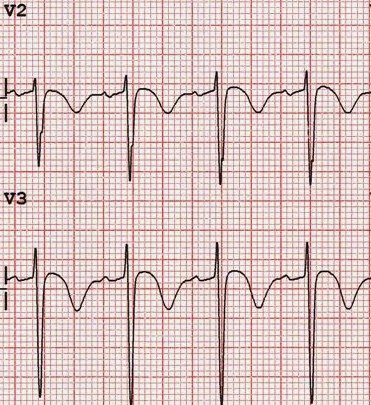 The diagnosis should be made by the history obtained from the patient and ECG only, as cardiac enzymes will be normal or only mildly elevated.  This also helps enforce the importance of serial ECGs and pain-free ECGs in patients with a history of chest pain that is concerning for unstable angina/ischemic chest pain.

These patients do not necessarily need immediate catheterization, but they need urgent catheterization.  These patients should not undergo a stress test, as it places them at risk for an acute anterior wall myocardial infarction.  Cardiac catheterization has demonstrated patients with Wellens syndrome to have a 50% or greater stenosis of the proximal LAD.

Case resolution:
This patient’s ECG showed Wellens Type B (or Type II) … biphasic T waves in leads V2 & V3 (and arguably in leads in V1 & V4 as well), the computer read it as “T wave abnormality, consider anterior ischemia.”  The patient was asymptomatic in the emergency department and had negative cardiac markers and was admitted to cardiology (the patient was reluctant to be admitted).  Cardiology did order a treadmill stress test for the morning, which the patient failed and thus went to cardiac catheritzation and a 95% proximal LAD lesion was found and two stents were placed.

Had this been missed, the patient likely would have passed in bliss during intercourse with his younger significant other (personal commentary).